We have prepared this short introduction to The Official Guide of the Railways and Steam Navigation Lines of the United States, Porto Rico, Canada, Mexico and Cuba – “The Guide” – because it can be quite daunting to users who may be unfamiliar with the American railroad scene.

In the pre-WW2 guides, over 1,000 railroad companies might be represented. All the larger companies, and many smaller ones, would have a route map and a specific section in the Guide. The ordering was partly geographical, starting with lines in the east of the US, then moving southwards. Lines west of the Mississippi would be found in the middle, Canada would follow, then a myriad of smaller specialised companies, including many inter-urban services. Mexican and central American railroads would be intermingled with with the steamships serving those countries. Before the advent of air travel steamships on the east and west costs, the Great Lakes etc required many pages.

A typical professional booking clerk would know approximately where to open the book. Even so, the railroads were vying to catch their attention, hence the use of maps, bold logos and easy-to-remember slogans. Nicknames became regularised – the “Nickel Plate” was the New York, Chicago & St Louis; the “Soo” line was Minneapolis, St Paul & Sault Ste Marie.

Minor railroads would be slotted in wherever there was a convenient gap. The Guide at the time was mainly for passenger services but freight-only and inter-company transfer operators would still advertise their addresses, officers and function. Was this paid advertising? We’re not sure.

The maps usually appear at the beginning of each company’s section. We suggest you choose one, then browse from there.

Following the map, most companies usually listed their senior staff and their locations. A larger company would then list its stations and the relevant page or table numbers. For reasons of space, abbreviations were heavily used – for other companies, for states – and symbols too. Some minor stations might appear in the index but not in a condensed timetable.

The maps were competitive tools for attracting attention. Each company showed its routes as being more direct and prominent than those for other companies, and often failed to acknowledge that alternatives might exist. 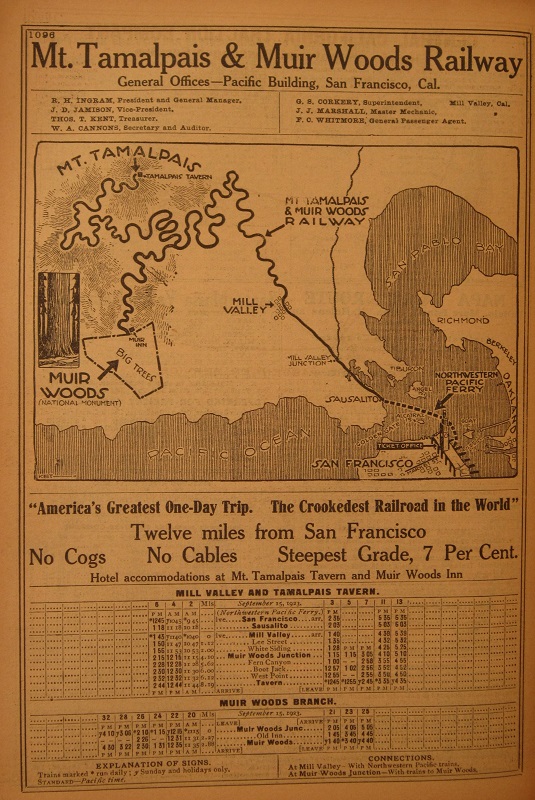 For the non-booking clerk, using the indexes would be necessary. The railroad companies and shipping company indexes would be near the front, highlighted by Timetable World in orange and blue respectively. The same company might appear under multiple names, the result of takeovers, or using the nicknames.

The harder work begins when you need to start with a station. The station index appears at the end of the Guide and is highlighted by Timetable World in green. It’s a large index, because there were an estimated 60,000 stations at peak. The station and its state would be linked to the companies serving it, but not to the page numbers. Any numbers would refer to a table number within a company, but you had to locate the relevant section via the railroad index. Multiple stations served by other companies might indicate how far apart they were.

As a random example, take Kanawha, Wood County, West Virginia in the station index extract below:

The Baltimore & Ohio had a station on one side of the river, the Little Kanawha Railroad on the other side. Table 15 in the B&O section appears on page 405 of the 1923 Guide, and the station is served by two stopping trains per day. Express trains between New York and St Louis pass through and passengers could interchange whilst remaining on the B&O.

And Table 29? It cannot be located.

Looking in the railroad index, the Little Kanawha RR turns out to be part of the B&O too, and is Table 60 on page 411, also with two stopping trains per day. Did folk have a choice of four trains per day? Not really – there was no bridge.

Timetable World would love to index the Guide more fully but experiments with using OCR have not been successful. 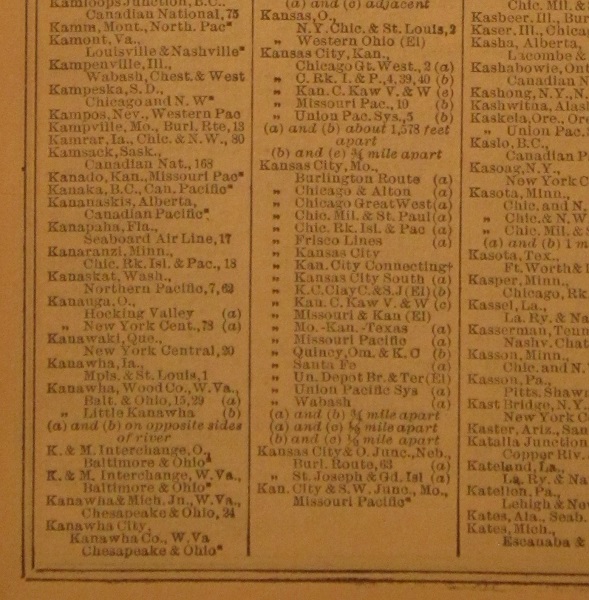 History of “The Guide”

The first edition of The Guide was published as Travelers Official Railway Guide of the United States, Mexico and Canada in June 1868. That was three years after the US Civil War had ended and the year before the first transcontinental railroad was completed.

The US railroad system grew dramatically over the coming 30 years, incentivised as it was by generous land grants – often 10 miles either side of the line. One interpretation is that these were real estate companies that ran trains.

Bankruptcies and line closures were not uncommon, and the US government shut down several impractical lines during a brief period of public ownership in 1918. The Guide grew throughout to peak at around 1,500 pages in the 1920s. Passenger traffic reached a new peak during WW2 but the network had already been scaled back during the 1930s Depression.

Dieselisation, motor cars and air travel all came early to the US, and our 1952 edition shows considerable shrinkage.

The Guide is still published but its role has evolved to serve freight shippers. 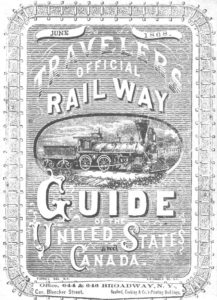