In the late 1980s, Poland was the last country of Europe which still had widespread use of main line steam locomotives. It also had a very dense network of branch lines, as many people relied upon public transport for their daily commute, with car ownership being relatively uncommon. Modernisation of the railway was taking place – principally in the form of electrification.

For an enthusiast travelling to Poland, it was vital to know where to find the steam locos, which areas were predominantly diesel, and what had been electrified. Visitors returning from Poland were encouraged to share their experiences either by full written reports, or summaries published in such publications as World Steam, Continental Railway Journal, etc. From such sources, individual trains were identified, and (sometimes) full diagrams reconstructed (see example below). The timetable was then marked up with the reported traction and the month/year, to aid in planning the journey.

The PKP 1987 timetable was annotated by a Timetable World contributor. 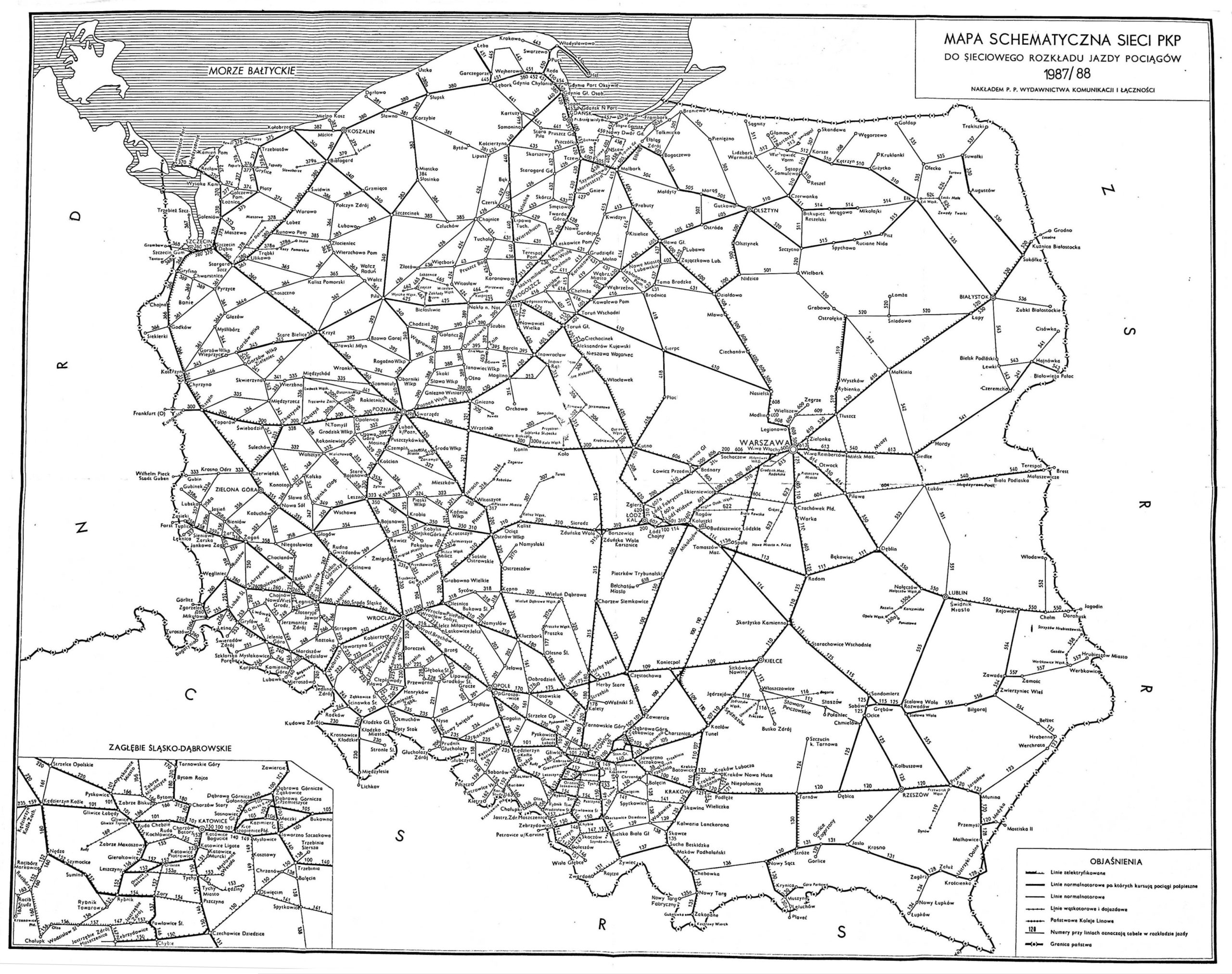 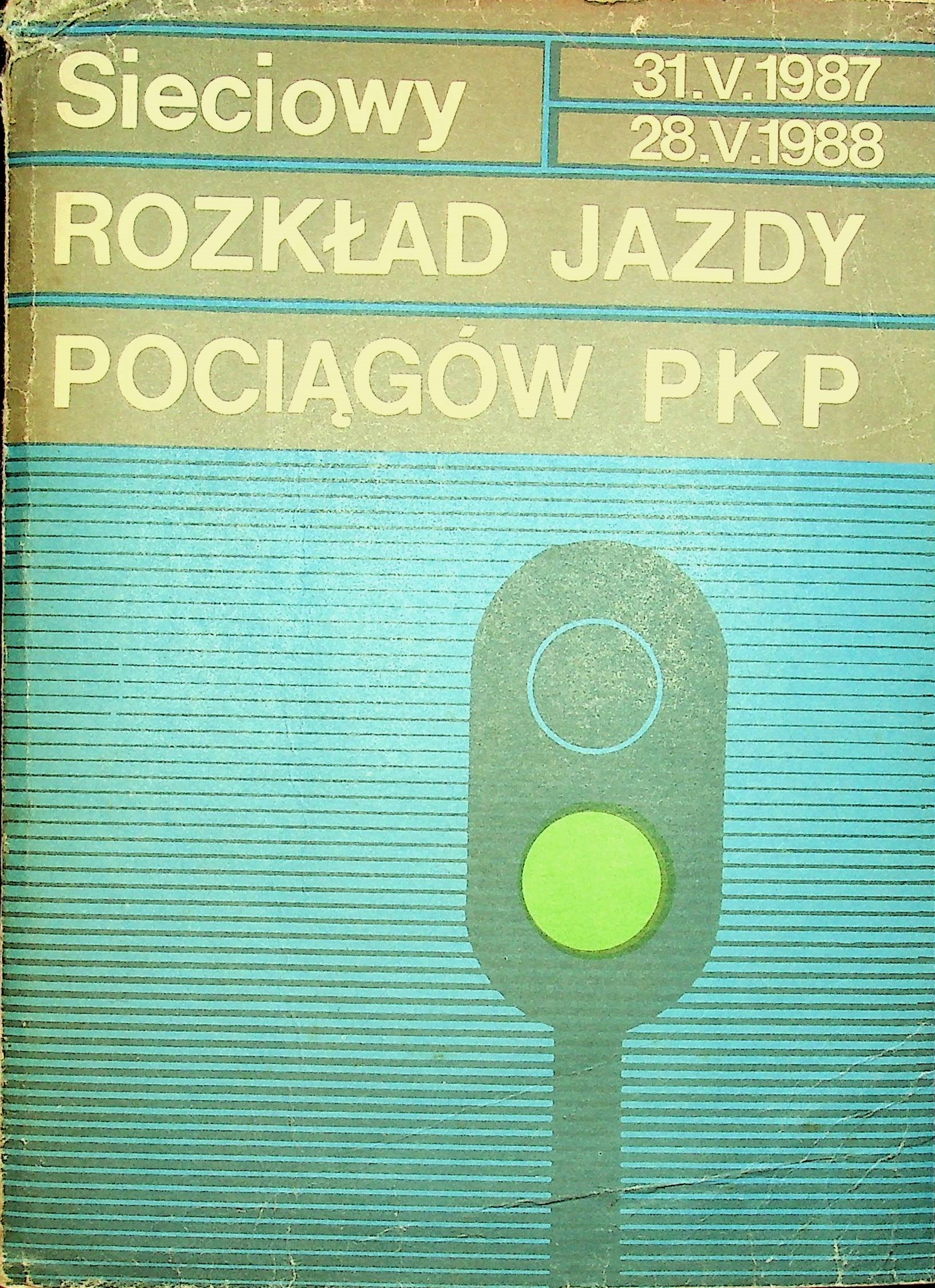 The timetable is arranged as follows:

A timetable supplement is also included, including a reissue of Tables 405/6 to apply “from a date to be advised” i.e. upon completion of electrification works.

The manual abbreviations used in the written timetable annotations are:

Only those tables featuring steam traction are annotated in detail. An underscore with a downward diagonal stroke indicates a loco change point, so information above that point in the column refers to the traction up to that point, and information below that point refers to traction beyond that point. (Beware, some tables read top to bottom on the left of the page, bottom to top on the right).

Where a train number had a diagonal line through it, this denotes it is a long distance working which has always been reported as diesel / electric, and can be discounted as far as steam workings are concerned.

The use of the asterisk* to denote a No Heat diesel was important, as some services were dated and ran only in peak holiday periods. During the summer season these would be no-heat diesels, but during the winter peak (Christmas / New Year) these would require heating, so could be hauled by steam locos. The timetable being scanned is one which has been so annotated, thus it offers clues as to which routes and individual services were still steam worked – partially or in full – at that time. Any "surprising" working e.g. a steam loco on an otherwise diesel or electric only route is highlighted with an exclamation mark, to draw attention to the fact this may have been a one-off working, maybe not a regular diagram.

Within Poland – other than the International services – inter-regional trains generally had 4 or 5 digit numbers. The first digit denoted the origin region, and the second digit the destination region. Hence the "San" is 53101 in one direction and 35102 in the other.

A change of status from Express to stopping service also triggered a change of train number, as shown on the Warszawa – Zagórz and vice versa services above. Trains prefixed with an E are worked by Electric Multiple Units. For the sake of clarity and simplicity, I've only shown one number per train in the diagram extract below.

Some timetables have two sets of timings supplied, with the comments "Po Ogloszeniu" and "Do Odwolania". These translate as "Until Further Notice" and "From a date to be announced" respectively. Typically they applied where electrification of that line of route was expected to be completed during the currency of the timetable, but the changeover date is not yet known. Table 130 is one such example.

1995 saw the 150th anniversary of ‘Railways on Polish Territory’. ‘Poland’ was a flexible entity during the 19th and 20th Centuries, disappearing altogether for some time, so the anniversary date could have been a couple of years either way, but 1995 was chosen as the opening of the first Polish main line. The first 30 km of the Warszawa – Wien main line opened on 14th June 1845 from Warszawa to Grodzisk Mazowiecki. To celebrate and commemorate that opening, Polish State Railways staged a large festival of rolling stock ancient and modern, and invited the heads of all European railways and some politicians to join them for a ceremony in Warszawa on 14th June 1995. In the years leading up to this, normal day-to-day steam loco operation had been all but eliminated throughout Poland, with only a small number of ‘Skansen’ museum depots operating tourist trains. Likewise, there had been a rapid spread of electrification, and closure of those branch lines deemed unfit for purpose or surplus to requirements.

The 1995 timetable includes some advertisements for special trains running in connection with the anniversary year. The timetable itself has a couple of handwritten annotations but is largely devoid of the notes of steam workings that were the hallmark of previous years. Some timetables contain no timings, where all services have been withdrawn. Others include a note that the services are provided by buses, not trains. (Trains with an ‘A’ prefix are provided by a bus). The original timetable had a printing error in that an entire blank page was included. The missing page 476 has been inserted in its natural position in this scan, and the blank page omitted. 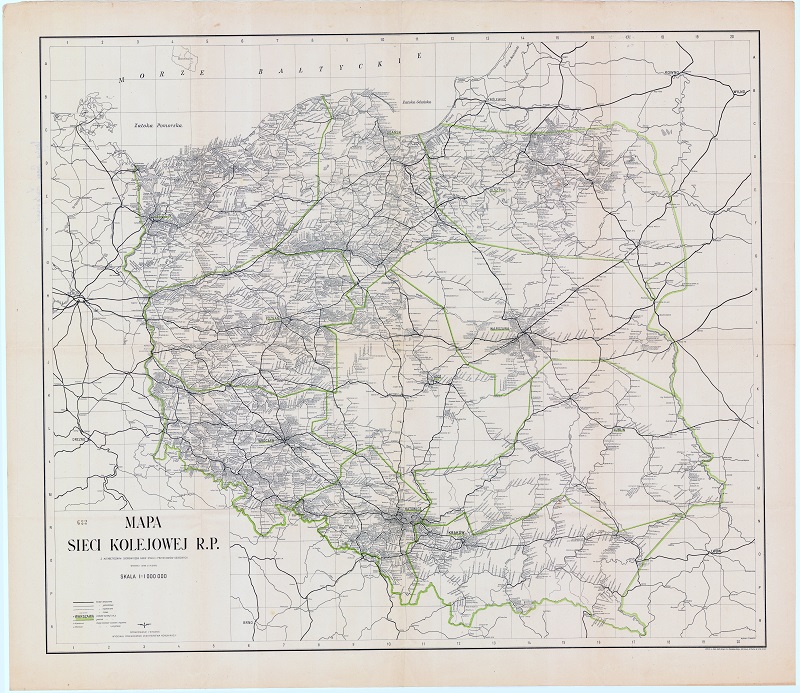 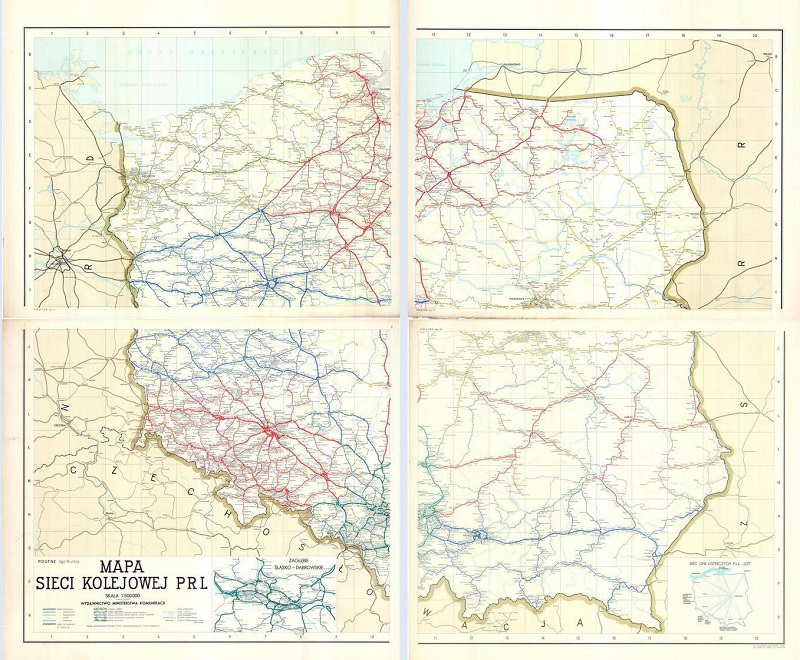